The Society encourages research and recording of the history of Dronfield and its ancient parish which includes Apperknowle, Little Barlow, Coal Aston, Dronfield Woodhouse, Holmesfield and Unstone.

Regular meetings are planned in conjunction with the Dronfield Heritage Trust management. Speakers are varied, on local topics and the wider spectrum. Suggestions for talks and visits are welcome.

Conservation of surviving buildings and features of the town and area has been a major objective and in association with the Civic Society we monitor any plans for re-development or alterations of old buildings.

Members keep in touch with the activities of the affiliated groups through the website and the Trust’s regularly updated printed programme.

The Society will continue to produce the Miscellany, a magazine of local interest, particularly relating to Dronfield’s past, which will now be published by the Heritage Trust.

The Society’s large collection of photographs and documents is now available online. The Trust is always interested in seeing and copying original material to add to the online archive.

A Brief History of Dronfield

Dronfield or ‘Dranefeld’ is first recorded in the Domesday Book of 1086. The area has been shaped by its proximity to the river and woodland and later by the industries that took advantage of these natural resources. The lead trade was key factor in the development of the market town and the lead merchants built many of the large houses in the area.

The first settlers in this area were probably attracted by abundant water in the river and tributary streams and by mature woodland. The Old English derivation of the name suggests that they perhaps also found open land which was infested by drones and for this reason called the place Dranfield, or, more familiarly, Dronfield.

The History Of The Name

Other names of Old English origin point to early outlying settlements on land cleared of trees, (Woodhouse, Stubley), or on land with a predominant type of vegetation (Birchet). Other hamlets have descriptive names – Coal Aston, the cold town in the east; or Cowley, the clearing of the charcoal burners.

Not much is known about Dronfield from its origins up to and beyond the Norman Conquest, apart from the fact that it seems to have suffered considerably during William I’s harrying of the North perhaps as a punishment for insurrection and non-co-operation with the Normans. The Domesday Survey of 1086 says very little about the settlement except to confirm its existence and suggests that it was not very valuable. 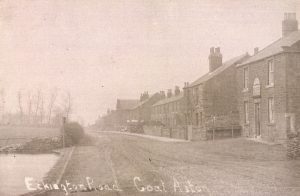 The old ecclesiastical Parish of Dronfield was very extensive, stretching from Little Barlow to Coal Aston and Povey, from Holmesfield to Unstone and Apperknowle, and including Dore and Totley. The church of St. John the Baptist, the earliest known date for which is 1135 when Oscot was Rector, was one of the richest livings in the Hundred of Scarsdale.

Apart from the church, known vestiges of Dronfield’s medieval past remain in buildings such as the Green Dragon Inn, once the hall of the chantry priests and the headquarters of the Guild of the Blessed Virgin Mary, established in the mid 14th Century. Its history as an inn probably dates from the dissolution of the monasteries and the subsequent suppression of the guilds and chantries in 1547.

The interior of the barn on High Street with its carved king post has been dendro-dated to 1430. It is situated on an important north-facing site overlooking the river valley and the steep slopes opposite and is believed to have been Dronfield’s earliest manor house.

That the Dronfield area was prosperous during the sixteenth, seventeenth and eighteenth centuries is inferred from the number of fine houses dating from these periods, still standing today. The Henry Fanshawe School was founded as a result of his will dated 1569. 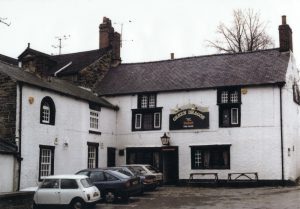 Some of this prosperity derived from Dronfield’s position on one of the routes from the lead mining and grindstone making areas of the Peak towards the transport network on the navigable rivers to the east; several successful lead merchants, amongst whom were the Rotherhams who became lords of the manor of Dronfield, made their homes in the immediately surrounding district and the town itself.

One other less well known source of reasonable competence was the trade in wool. Studies of Dronfield from 1535-1650 have shown that many farmers had sizeable sheep flocks and that a significant number of families were engaged in spinning and weaving, in fulling and the production and selling of cloth. There was a dye works situated near the bottom of Soaper Lane, with soap making and tanning also going on this river bank area.

Coal mining was an early feature of Dronfield life, pits at Stubley being mentioned as early as the sixteenth century and a map of c1640 of Hill Top showing numerous workings.

The pace of development was slow, gathering speed with the opening of mines at Dronfield Woodhouse, opposite the top of Carr Lane in 1795 and at Coal Aston in 1785 and coming to a climax around 1870 with the opening of the Midland Railway and the consequent improvement in communications. By the end of the century there had been mining in most parts of the district, although few traces of it now remain.

Another traditional Dronfield industry was the making of scythes, sickles and other edge tools, although this was never carried out to the same extent as in neighbouring Eckington, Ridgeway and Troway. As with coal mining there was a slow but steady development throughout the eighteenth century.

By 1811 Samuel Lucas, steel refiner, had set up a foundry exploiting his patent for malleable iron on the ancient dyeworks site and by 1822 his brother, Edward, had bought the works and continued a family association with Dronfield lasting 160 years. The name “Edward Lucas and Sons” continued to be used. 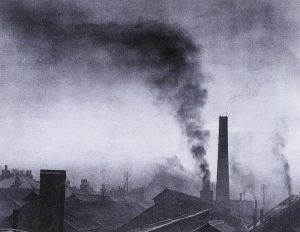 What was made in the Lucas foundry in the beginning is not precisely known, although one product is reputed to have been cannon balls during the Napoleonic Wars; certainly by 1828 in “the bottom yard” the firm was making spindles and fliers for the machinery of the fast-expanding cotton, jute and linen trades in Lancashire, Dundee and Northern Ireland as well as for the overseas trade. There were two Lucas sites. In the top yard, known as “the tilt”, a reference to the hammer forge, Lucas’s also made spades, shovels, files and railway wheels, steel spokes and plates of malleable iron. Eventually the two sites were run separately because of family differences. The firm split in 1890.

There was another spindle and flier manufacturing concern at the Damstead Works of Ward, Camm and Siddall on Mill Lane and many smaller firms making sickles, reaping hooks, scythes and heavy edge tools. Dronfield had six foundries. The last survivor is William Lee on Callywhite Lane.

Industrialisation in Dronfield reached its zenith in 1873 with the arrival of the Wilson Cammell steel rail-making plant on Callywhite Lane and for ten years the town enjoyed boom conditions.

The population rapidly increased, new areas of housing were built and many shops were opened.

The coal and steel industries both suffered a decline in the 1880s and by 1883 the rail-making plant had been removed to Workington in Cumberland in an operation which astonished the commercial world. The economic slump and the Wilson Cammell removal left Dronfield a stricken town with hundreds of empty houses and it was many years before there was a return to relative prosperity.

Some coal mining remained into the twentieth century and there were some steel and tool-making concerns, Lucas’s foundry and spade and shovel works amongst them. The last casting in the bottom yard was poured in 1971.

The scars of the intense industrial activity of the nineteenth century healed slowly and now have been mostly obliterated although the town’s ancient core remains as an evocative reminder of a very different past.

Dronfield had a new lease of life after WWII with the development of huge housing estates on both sides of the Drone Valley, bringing an increase of thousands to the town’s population. There is a new Industrial Estate on Calleywhite Lane. Old sites have been reused, an example being “The Forge” retail outlet in Church Street, once occupied by Butler’s Foundry. Most recent is the development of Dronfield Hall Barn in High Street as a heritage, arts and education centre for the community.

Make great savings on ticket prices!
Complete the membership form by clicking the button below: