The Pentrich Revolution in Art

Our first exhibition of the year opens next Tuesday from January 22nd – make sure you come along as we exhibit artwork from local artists in our gallery on the theme of the Pentrich Revolution!

The name of the exhibition, which runs till Sunday 24th February, is “The Pentrich Revolution in Art”. This was an armed uprising in 1817 that began around the village of Pentrich, Derbyshire. It occurred on the night of 9th /10th June 1817. While much of the planning took place in Pentrich, two of the three ringleaders were from South Wingfield and the other was from Sutton in Ashfield. The ‘revolution’ itself started from Hunt’s Barn in South Wingfield, and the only person killed died in Wingfield Park.

A gathering of some two or three hundred men (stockingers, quarrymen and iron workers), led by Jeremiah Brandreth (The Nottingham Captain), set out from South Wingfield to march to Nottingham. They were lightly armed with pikes, scythes and a few guns, which had been hidden in a quarry in Wingfield Park, and had a set of rather unfocused revolutionary demands, including the wiping out of the National Debt.

One among them, however, turned out to be a government spy, William J. Oliver, and the uprising was quashed soon after it began. Three men were hanged and beheaded at Derby Gaol for their participation in the uprising: Jeremiah Brandreth, Isaac Ludlam and William Turner.

As well as artwork, we are delighted to welcome Michael Parkin – a member of the Pentrich and South Wingfield Revolution Group, who will join us on Thursday 24th January (7:30pm) to give a fascinating talk about this subject. Tickets can be purchased for £4 (£2 for Friends).

Younger visitors will also be able to take part in self-led quizzes while the exhibition is running, on February 19th, 21st, and 22nd. For more details, view the poster below: 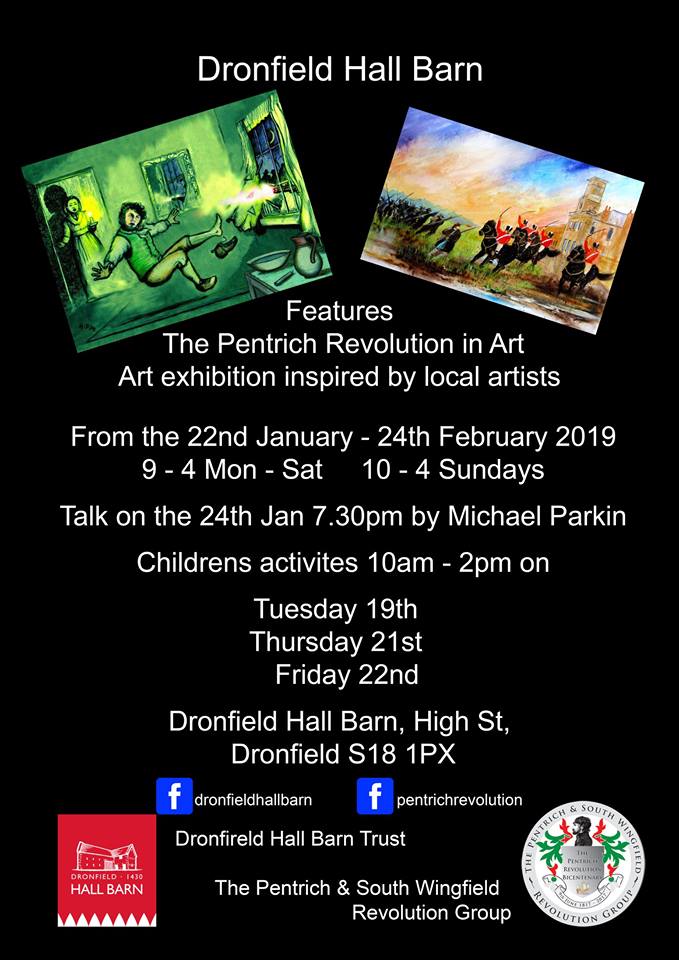